Let me start with this picture:

This basically sums up my experiences at the motorcycle bar. This man was wearing a helmet with horns and a mowhawk. He was carrying around something wrapped in a blanket. At one point, between songs, he unwrapped his shofar, which is an animal horn that was used by the Jewish people in biblical times, and he blew it loudly. When everyone stopped and looked at him, he yelled, “Jesus is alive!…..Yeah!” We all just sat there for a second, taking it all in, then the other man in the picture stood up and yelled “He is Risen!” and then they hugged.

I’ll tell you why that’s a very summative example of my experiences at the motorcycle bar on Easter.

But first, back to the beginning!

We had to park in the nosebleed section, as the up front parking was reserved for those with actual motorcycles, but we were okay with that. PS- We drove  my car, not the scooter. It was too far away and I wasn’t sure if we’d be laughed out of the service if we rolled into a motorcycle bar on a red American-made scooter wearing bobble head helmets.  Before entering the bar, we wandered around the attached motorcycle shop and Alex drooled for a little bit while I gawked at all of the pictures of scantily clad women that adorned the walls. When we heard the music start, we wandered around to the bar.

It was immediately apparent that we stuck out like a sore thumb. I was wearing a jeans shirt and skinny jeans and Alex, poor Alex, was wearing a pastel teal micro-suede teal shirt with buttons. I should have ripped the sleeves off of it while we were still in the car, but I was too excited. We found a seat at the bar and just sat back and took it all in.

There was lots of black leather (as in almost exclusively black leather). There were many people taking advantage of the Bloody Mary bar (and they didn’t feel guilty cause, “Jesus did it Hisself”). Many of the riders were sporting crosses on the back of their jackets.  There were different Christian riding clubs.

Someone sat down at the table across from Alex and I and we started chatting. It turns out that this guy pastors a motorcycle bar church in Plano once a month.  We talked with him for a good 45 minutes, sharing about our adoption and listening to things that he needed prayer for.  He talked about how most of his attendees would NEVER set foot inside a conventional church, but they feel comfortable coming to 2nd Sunday Motorcycle church.

Once the music was over, we moseyed on up to the front so that we could hear better. The first thing they did was introduce a group called the “Circuit Riders”, which is a throwback to the early Methodist church (holla!). It’s basically a Christian motorcycle group that host events, do fundraising for charities, etc. They announced that they had elected a new vice-president. He had a ponytail on his face. When he was given the microphone, he said, “As some of you know, a rider went down this morning…” and then his voice cracked and everyone wearing jeans shirts, black leather, and pastel teal teared up. The microphone was handed to someone else and they explained that the people who had fallen on their motorcycle were the new vice president’s daughter and son-in-law but they were okay. The crowd roared and clapped and praised Jesus.

Next, a guy named T-Bone gave his testimony. He became a Christian in a motorcycle shop. The circuit riders were there to pray for people and their eagerness to pray for his cancer-stricken daughter surprised him. He said that, while he would never have gone into a traditional church, God ambushed him in the helmet section of  Pete’s Motorcycle shop. It was quite beautiful. A woman next to me was openly weeping.

The main attraction was the next guy. Let me show you a picture from his twitter feed  first: 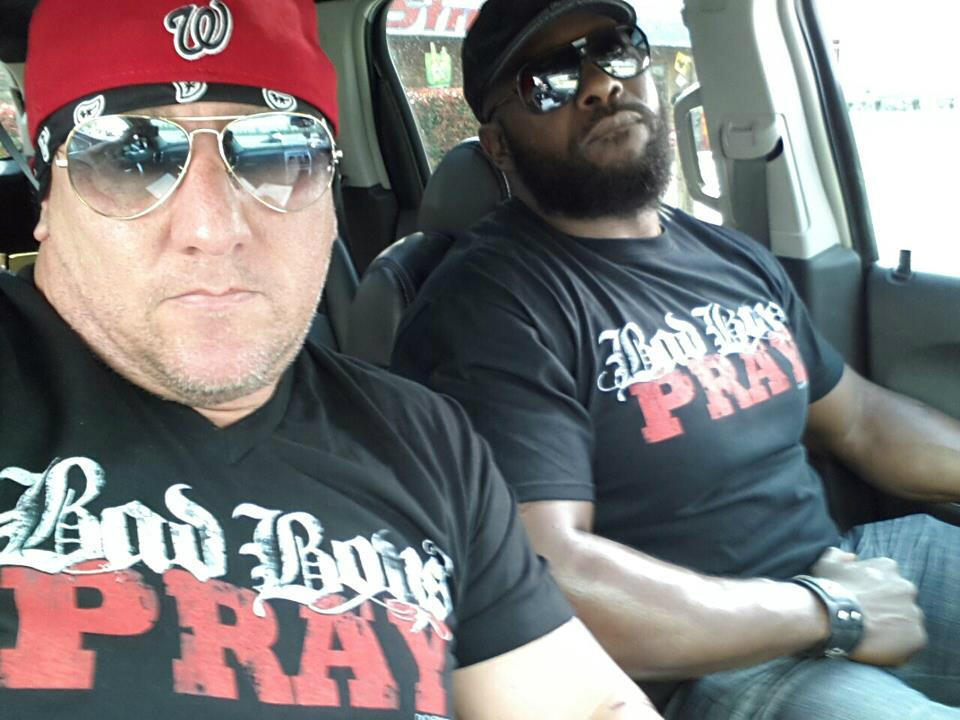 So, the guy on the left is Duche Bradley (pronounced Dutch, by the way. I’m not sure you would want to mispronounce this guy’s name to his face). He was a bodyguard for Jennifer Lopez and for P. Diddy Combs. He’s built  like a cinderblock wall. He was a coke dealer and he got arrested and found Jesus in prison. Now he goes around speaking on behalf of I Am Second Extreme (Oh, you didn’t know there was one of those, either?) His message was pure Jesus- forgiveness, grace, God meets you where you are. It was quite beautiful. The African American guy sitting next to him in the picture above did a spoken word piece about addiction that moved me to tears. Duche then got back up and did a reenactment of the crucifixion, relating it to the crowd by using metaphors like “Jesus rode into town on a Honda, not a Harley!” and mentioning that Simon of Cyrene was a dark-skinned man and using that to talk about the issue of race within the motorcycle community.  He’s such a big guy and a charismatic teacher that the crowd was silent.

Alex and I had to leave to go to Easter event #2 so we whispered to our friend that we were leaving and he said he wanted to walk out with us to give us something. We were parked in the same area so we walked to the cars together. He dug around in his truck a little bit and came out with a business card. He pulled out something else and said, “There’s one more thing. When you come to 2nd Sunday Motorcycle Church once, you’re part of our group. I know you guys haven’t been yet, but I feel like you are and I want to give you this.”

Well, I lost it (emotionally). I started weeping openly in the parking lot at motorcycle bar church. Then the pastor started crying too. It had been an emotional service anyway and maybe I was just holding it in, but I was touched deeply by this offer of community from someone who I had just met.

And that’s what I learned from motorcycle church. The level of community and fellowship there was almost unlike any that I’ve ever experienced in any of my straight-laced, non-tattooed churches. The air was thick with acceptance and forgiveness and love. They aren’t focused on who you are or what you do or what you look like. Their focus is Jesus, pure and simple. When T-Bone and Duche shared their testimonies, the alcohol and the sexiness and the tattoos and the incredibly long facial hair stopped being important. We were all focused on Jesus and there was unification in that.

At that Easter service, I know that almost anyone would have been accepted there- drug addicts, the homeless, etc. I’m not sure that I can say that for most brick and mortar churches. Sure, we say that everyone is accepted, but do we really mean it? Are we really practicing it? I pray that we can move towards that, towards ignoring labels and stereotypes and loving people where they are, instead of where they should be or where they shouldn’t have been.

Because that’s where the healing is.

That motorcycle patch is a physical invitation of being invited into a community that wants me just as I am. That was the most intoxicating part of my Easter service at the motorcycle bar. (Pun intended).

(You can read my thoughts before we went to this here.)