The first asylee I ever met was a man from Eritrea. We’ll call him Ben. Ben had flown to Central America and come into the US across the Mexican border. He claimed asylum when he got here. I met him when he’d already been here about two years waiting on a judge to hear his case. While *technically* he was here legally, claiming asylum put him in a legal no man’s land. Until a judge heard his case and granted him asylum, he was here  but not really.  He didn’t have a social security card, so he couldn’t work. He wasn’t technically a citizen or legal permanent resident, so he could receive any benefits. He was living on a friends couch and, despite being disabled, went and stood in the parking lot with all the day laborers to get money to help his friend with rent and pay for his asylum lawyer. Finally, after three or four years of basically being forced to be homeless, a judge denied his asylum case and Ben had to move to Canada. What a loss for us….for U.S.

I will admit that before working with adult refugee and immigrants, I didn’t think much about immigration. The thought that there were people here who came into the country “illegally” made me uncomfortable. I wasn’t pissed about it, but I didn’t like it.

It took proximity to immigrants for me to rethink this. It wasn’t until I met an undocumented person, watched them with their kids, heard their story, saw how hard they worked, that I realized that I had bought into some ridiculous, untrue narratives about immigrants.

A few months ago, Faith In Texas put out a call for people to show up to an immigration court, to bear witness to a deportation proceeding, to stand with the nearly deported and his family. I got their late so I never actually set foot inside the courtroom but I did wait in the lobby with the family and clergy members.

I sat next to the accused’s young daughter. We talked about friends and music and youtube videos. She was bright and hopeful, like children should be. Whenever someone would step out of the courtroom, she would stop talking mid-sentence and stare wide-eyed at them until they made their announcement, breathless for news of whether she was going to grow up with a father or not.

The ruling finally came down that the judge in this case had been compassionate. She had heard how this man was invested in the lives and future of his children, how he single-handedly supported his family, how devastating it would be for them to lose this man, the rock of their family.  She saw a community standing behind him saying that it was important for him to be here.

In this case, he was lucky.

When the verdict was delivered, his wife collapsed in a heap of tears. The kids couldn’t quit crying. Literally a crisis was averted right before my eyes. How traumatic. How traumatic for your life to be in limbo for months and months waiting to see if you will grow up without a father.

When I see images of the border crisis, I cannot help but think of the people I have worked with. How hard they work, how much they risked so that their children have a glimmer of hope at a different life. I cannot forget their stories- of families with six kids living in a 2-bedroom apartment, of watching a woman dig through the dumpster at my job because they didn’t have enough food, of parents scared to travel to their son’s graduation from Army boot camp because ICE has been getting on cross-country buses illegally demanding proof of citizenship, of mothers forced to leave their children behind because even “doing it the right way” is expensive and takes years.

Their lives do not match up with the dangerous criminal who lives off the government teat. That. is. a. lie.

These people being detained at the border, torn from their children, placed into a prison system that profits off of their imprisonment? They are not nameless people. They are children of God. God cares for them just as much as he cares about the rich white lawmakers that demand their dehumanization.  It is easy to think of them as throwaway people. That’s the narrative. Just a mass of criminals pouring across our borders, not individuals with stories, likes, dislikes, people that love them and care about them. Resist the urge to dehumanize.

“Oh, you’re so emotional. I’m thinking logically! You can’t be swayed by stories! You can’t make policy decisions based off people’s stories.”

Ah, Western rationalism at it’s finest. How soulless. How inhuman.

What does it mean to be human if not to be moved by another’s story? You know who is unmoved by connection to other humans? Robots. If that’s what you aspire to, well…

To be honest, I could lay out the sordid history of US immigration policy here. I could post the countless reports that say that immigrants actually help US economies. I could explain the complex factors that cause people to leave their countries and flee to a country where they are forced to live in the shadows, but at least they are safe (ish). I could tell you that the US caused a bunch of that upheaval. I could point out that laws are passed and people go from having legal status to being undocumented before the ink is dry. I could remind you that I.C.E. was created in 2003 and Fox News pretends like it’s a God-given department of our government that has been here forever.

But you know what?

I could find all of those sources for you and you might read them but if you really want to know, you should do it yourself. I saw Austin Channing Brown speak this week and she said clearly that it’s not her job to educate white people about racism. We have to do the work ourselves. We have to prove that we’re invested in it. This is the same.  Go google the history of immigration policy. Read books and blogs by immigrants. Stop relying on your regular media sources to educate you and do the work yourself. Get uncomfortable and sit in that discomfort.

Please understand that laws are not inherently moral or ethical. In fact, lots of laws are exactly the opposite.

Think for yourself. Your morality and ethics should not be determined by what happens in Washington.

And if you are a Christian and you’ve stuck your thumbs in your belt loops and decided that these people deserve whatever they get cause they “didn’t do it the right way”,

you have lost your way.

You are prioritizing {your country, your money, your safety, your laws, your political beliefs} above another human being and you have lost your way. There is no other way to say it. 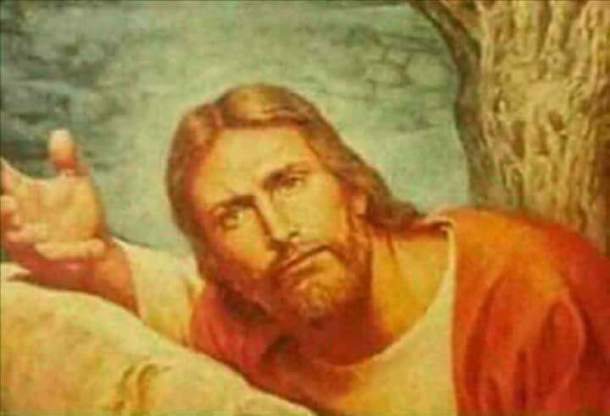 Jesus was a Jew and Jews have a tradition of welcoming the stranger. Again, go do your research. Jesus consistently challenged the walls erected between people by the powerful. If you think Jesus would have been cheering on border patrol, then we aren’t reading the same Bible.

13 “Woe to you, teachers of the law and Pharisees, you hypocrites! You shut the door of the kingdom of heaven in people’s faces. You yourselves do not enter, nor will you let those enter who are trying to. (Matthew 23)

Quite honestly, I’m not going to debate this. Because debating assumes that there are two equal, valid sides. And you know what? If you think that the US shouldn’t welcome Muslim immigrants because they’re Muslim or poor Spanish-speaking immigrants because they’re poor or disabled immigrants because they won’t contribute to our economy, you’re wrong. You’re wrong and I feel sorry for you. I’m not going to coddle the feelings of people who believe that marginalized people deserve to be marginalized by pretending that you have some “good points” in your argument or that your argument is even valid in the first place.

Jesus certainly didn’t coddle the powerful and the privileged in his day. He loved them, but he didn’t pull any punches.

I’m not going to either.

What’s it going to take? We can’t be silent. We can’t stew or rage in our houses and then be quiet when our co-worker wears his MAGA hat and talks about those “illegals”. It’s going to take some balls, and I am talking to myself too.

Trump assumes that the silent majority agrees with him. Indeed, during the election the silent majority certainly surprised me. Those of us that don’t agree have got to be more vocal, call racism out when we see it. White people have run amok- they are calling the police about all sorts of stupid things. If you witness racism, bear witness, call it out, talk to the manager, film it. A white woman called the police on a boy selling candy and a white man stepped in and bought all of the candy, diffused the situation, and shamed the woman. Racist white people (in the pulpits, in Washington DC, in our families, in public) are empowered and we, those of us that disagree, have to make it loud and clear that it’s NOT OKAY TO BE RACIST. Until we speak up, they’ll continue to assume that the white people around them agree.  Until we speak up, our mostly white male politicians will assume that their white constituents agree.

I do not agree. 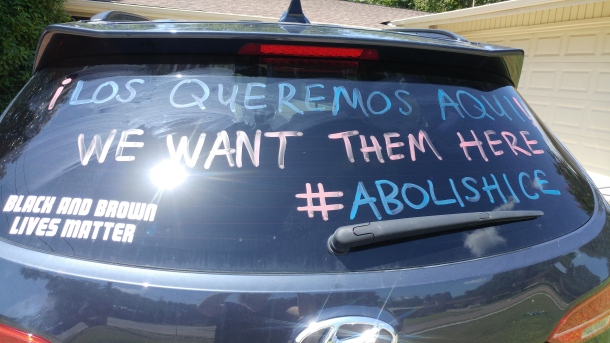 To donate, volunteer, keep up-to-date on the border situation, I recommend following Raices, the organization that raised 20 million dollars, which it has offered to the US government to bond out parents before they can be reunited with their children.

**If you are local to me and want me to come tag your car like the pic above, I’d be more than happy to do so.

3 thoughts on “Los Queremos Aquí :: We Want Them Here”