We just returned from a trip to Nashville where we visited my sister Leah, AKA the Leggy, Bronze Goddess, and her husband Tyler, the Abercrombie model. I’ve always been the more Quasimodo-esque sibling and this time was no different. In case you think I’m joking, please compare these two pictures from this weekend:

One looks like an engagement picture. The other looks like two people who have never used their limbs before. I don’t know what possessed me to hitch my arm around Alex’s neck like I was going to strangle him. Perhaps it’s five years of marriage?

ANYWAY, the trip was full of music studio viewing, good food, relaxing, and hipster watching. More on that later.

Since we’ve become vegetarians, good food has become an important part of our traveling and we were NOT disappointed. On Friday, they drove us around town a bit, showed us some famous recording studios, we took a nap, and got some Mexican ice cream. Then we went to a big farmer’s market in Nashville. They were having a night market, which was awesome. The produce was abundant and inexpensive. We went a little crazy. 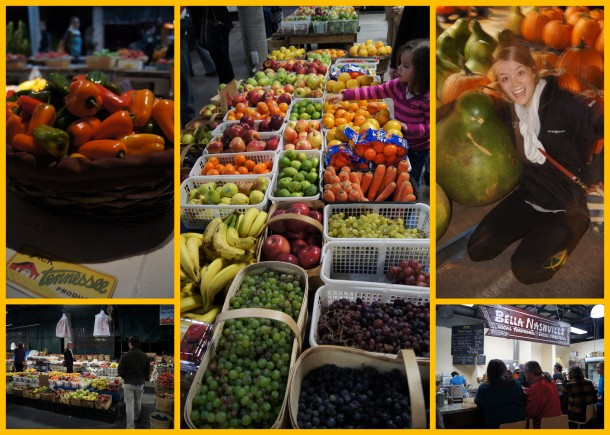 Man, we were in vegetarian heaven. The local produce was so fresh and there were some crazy things that we had never seen before, like purple bell peppers and purple cauliflower, which we promptly bought to make a vegetarian curry.

On Saturday morning, I showed Leah how to make some homemade “preserves” out of raspberries and then we all went trail running at a beautiful park near their house. I only almost fell on my face twice. The uphills were KILLER but I was able to do them (after resting a bit at the bottom of the hill). Afterwards, we wandered on over to the nature center, where we got to try some persimmons fresh off the tree. They had a community garden where Leah “accidentally” picked a jalapeno. Alex and Tyler played “stump the volunteer” by asking which seeds and fruit were edible.

We had butternut squash soup for lunch which turned out to be DELICIOUS (perhaps because the butternut squash was so fresh). Then, Tyler decided that he wanted to do a corn maze, which I had never done either. We searched and decided to go to Lucky Ladd farms. Let me explain.

The goal: Visit and patronize a family farm, become best friends with them, and have them invite us to come live with them

The reality: The closest a fall festival can come to a semi-lame  amusement park.

I’m talking overflowing port-o-potties, seemingly thousands of little kids, “seventy” activities (I say “seventy” because I’m fairly certain that they counted each rope swing as one activity). We made it through the corn maze in about 10 minutes and we even stopped to take pictures. 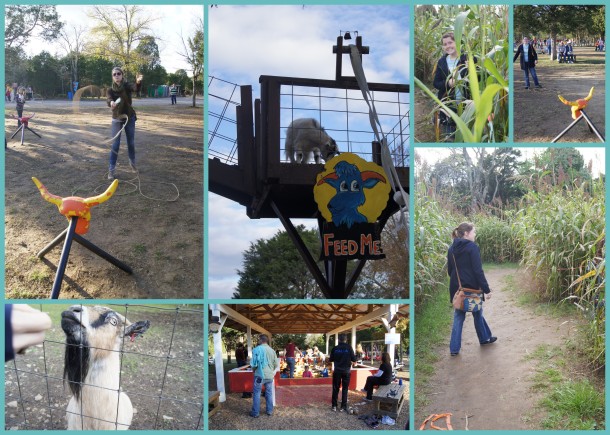 We pet some goats, took a “nature walk”, roped some fake calves and…oh yeah, Leah, Tyler, and Alex ate some kettle corn out of a trashcan. Tyler really wanted some but the line was really long. Alex noticed a full bag of kettle corn in the trashcan behind the concession stand. So, Tyler and Alex PULLED THE BAG OUT OF THE TRASH AND ATE SOME. Here’s a picture of Alex and Tyler trying to convince us that it was fine. 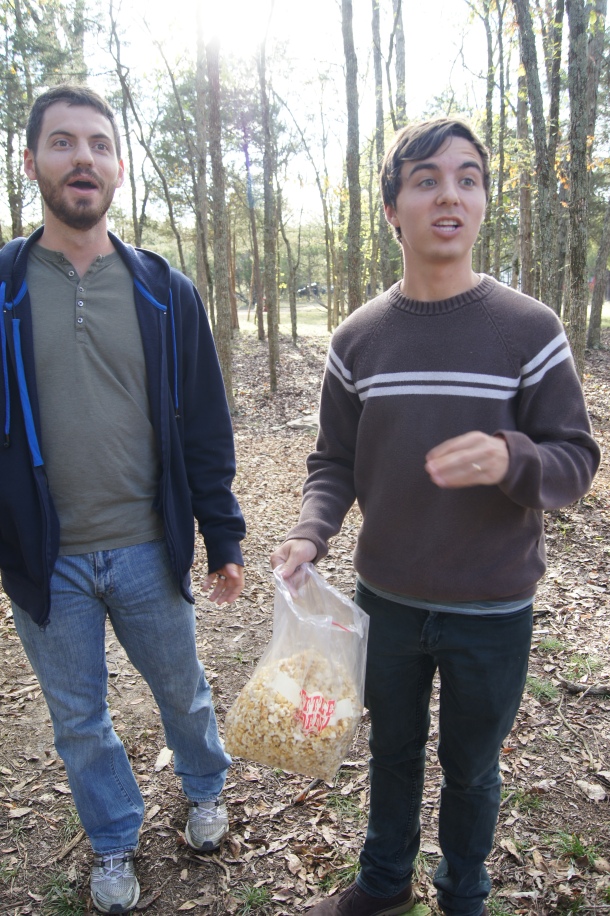 Upon closer inspection, we discovered that the bag had 1) ketchup on it, 2) a human hair on it, and 3) a slit in the side to let in all the germs. For most people, these would have been deal breakers, but I was the only one that kept my wits about me and avoided eating food out of a trashcan.

After this, we were starving so Leah and Tyler treated us to a vegetarian dinner at The Wild Cow which was one of those meals that makes me feel grateful to be a vegetarian. Our waiter was a skinny little guy with a huge beard and John Lennon glasses. Also, I’m almost positive that his pants were made of hemp.  Their hot sauce had been made by ex-cons and they had weird pictures of roosters hanging by our booth. It was hipster heaven. I had black bean and sweet potato tacos.  If you think that sounds gross, then I’m punching you in the face through my computers screen right now. We were in a vegetarian food coma at the end of the meal. It was very well done.

Then we walked down the street a bit and got some ice cream at Jeni’s, which is delicious (but expensive) handmade ice cream place. I got pistachio and salted caramel, which was awesome. Also, Tyler spotted the lead singer for New Found Glory, who seemed to be there with his family. It was kinda cool/weird to be in the same room as someone that I listened to with a certain punk boyfriend in high school.

On Sunday, we got to go to church with Leah and Tyler, then we rushed home to start cooking our red lentil and cauliflower curry (featuring the purple cauliflower). It was DELICIOUS! We also ended up making an avocado tomatillo salsa (which I will get the recipe for once I check with the person who shared it with us). The meal was, in a sense, delicious. We had originally intended to have their neighbor over for lunch but he forgot and ate at home. So, more for us! 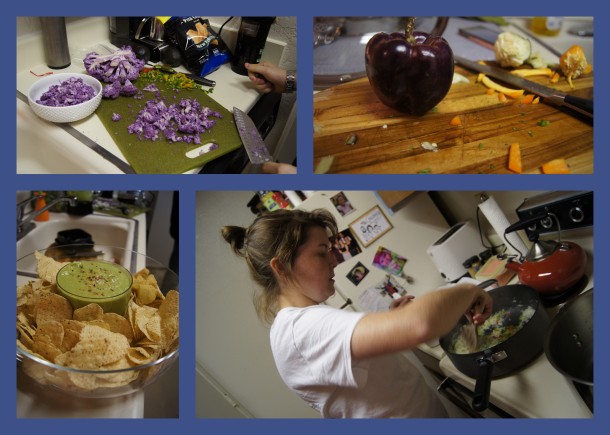 I was definitely feeling a post-lunch, Sunday afternoon nap, but Leah had other ideas. She’s going to be making coasters for an adoption fundraiser for us so we went to a million different places to find supplies. We also stopped by a store called, “Bargain Hunt”, which sold such cohesive wares as a toilet seat, bread maker, and egg incubator. I was basically drooling in the backseat when we got home so I laid down and took a wonderful nap. When I woke up, the neighbor stopped by and we had a little chat. I believe his name is Do-well (pronounced dewell) and he once baby sat Miles Davis. He also says, “Uh-huh, alright” after he says things, so I’m going to start doing that too.

That night, we went and ate dinner with one of their friends at a restaurant called Burger Up. We all got quinoa black bean burgers (which were delicious, of course), but if I was going to eat meat, it would be at a place like this. They locally source their beef and can tell you what farm it came from. There were many many hipsters there. In case you don’t know, a hipster is a person who has carefully constructed their identity to look like they don’t care. Pierced, tatted, hairy, a little slouchy, and awesome. Tyler and I pretended like we were hipsters. Leah tried to convince me not to slap her hamburger because “it wasn’t very hipster-ish.” It was the perfect meal to end our trip.

We loved every minute. It was relaxing and action-packed at the same time. We got to see a little bit of how Leah and Tyler live and I hope they enjoyed the dose of family (even if I did slap my sister’s hamburger and frog Tyler in the shoulder bone accidentally). When I went to college, my relationship with my sister was completely transformed. We are literally best friends. Now that she’s married though, I kind of feel old. It was great to see her as a wife with a husband, a couple that have full time jobs and their own place. 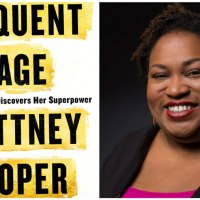