(Okay, Jesus has just began his ministry in Nazareth and he said that no prophet has ever been accepted in his hometown)  All the people in the synagogue were furious when they heard this. They got up, drove him out of the town, and took him to the brow of the hill on which the town was built, in order to ThRoW him DOWN THE CLIFF. But he walked right through the crowd and went on his way.  Luke 4:28-30

At times, I find that contrasting the Bible with what we expect from stories today hilarious.  Imagine that as a movie scene. People would have a riot! It seems so uneventful. “Just as the angry mob was fixing to push Jesus over the cliff, He decides to walk through the crowd and go pack his suitcase.”  It just doesn’t work in today’s society BUT in the life of a Christian, it’s very exciting.  Look at how Jesus reacted to a stressful situation. He walked away.  Sometimes, we have “angry mobs” of temptation in our lives and we feel overwhelmed. Well, good news kiddos, we have the power of Christ in us. He tells us to “Break the wrist, walk away…..” (Actually, just walk away; I wanted to quote Napoleon).

Another thing that I gleaned from this story was that he didn’t have to fight. It doesn’t say, “Jesus whipped out his sword and fought with all his might to get through the crowd.” In my mind, I see him walking through saying, “Excuse me, excuse me. Hi, how ya doin? Hi, sorry. Excuse me.”  Yes, fighting sin and temptation is a big deal but I think so many times that we picture it as this massive giant and the only way we can get rid of it is to fight as hard as we can. Last time I checked, David used a rock and a slingshot to fall a giant.  Sin is big but God is bigger.  So if you’re struggling with sin, don’t look at it as this huge thing that you have to kill, let God take care of it. Walk through it knowing that you have the power of Christ with you! 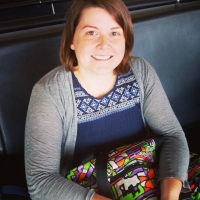