Nadia Bolz-Weber did the final sermon at the Why Christian? Conference in April. If you haven’t heard of her, you need to go check her out. I told someone recently that she seems to be the most Jesus-like person I know right now. Not because she’s particularly holy (she’ll tell you she’s not) but because she loves people in a way that challenges me. In short, she’s kind of intriguing and she’s kind of scares the shit out of me, which is likely how I would have perceived Jesus had I been alive two millennia ago.

In her homily, she referenced a sermon she had heard several years ago by a friend, Doug Gay, who pointed out that Lazarus never speaks in the New Testament. You know Lazarus, brother of the squabbling sisters Mary and Martha, the man who was raised from the dead by Jesus, the only person that Jesus is recorded weeping over in the Bible.

Mary, Martha, and Lazarus are major players in the New Testament and yet, Lazarus is silent. Nadia’s friend postulated that perhaps Lazarus was non-verbal. Perhaps Lazarus had special needs.

Perhaps Lazarus had Down Syndrome.

As soon as she said it, I had big ole’ fat tears pooling in the bottom of my hipster glasses.

She went on to say that she believed it to be true because it just reeked of Jesus- that his best friend, the man he loved most in the world, would be disabled.

As the mother of a very developmentally delayed three-and-a-half year old with Down Syndrome, this resonated with me deeply.

You see, I had always pictured Lazarus as one of Jesus’s bros- not a disciple, but someone who encouraged Jesus, hung out with him when he was in town, played Words with Friends. I always pictured Lazarus as someone who “gave back” to Jesus in all the ways our society expects our friends to give back to us. Like if Lazarus walked out of that cave stinking like death and then pledged his undying support of Jesus and then put up several billboards about how cool Jesus is.

What if Lazarus had Down Syndrome?

What if Lazarus had Angelman Syndrome?

What if Lazarus had a nonverbal form of autism?

Maybe Jesus fed Lazarus dinner, tenderly wiping the sides of his mouth when he dribbled.

Maybe Jesus picked the meat out of the stew because Lazarus couldn’t handle the feel of it in his mouth.

Maybe Jesus helped bathe Lazarus and gave him the simple pleasure of splashing in the water.

Maybe Jesus could understand Lazarus’s grunts and gestures as only someone who really loved him could.

Maybe Jesus talked to Lazarus even though he couldn’t make eye contact or talk back.

Maybe Jesus delighted when Lazarus was able to do something new.

I could weep just thinking about it.

Jesus consistently, routinely, purposefully sought out people on the margins, people who had no utility (according to society), people who had “nothing to offer”, people whom society had written off. And Jesus found the kingdom of heaven there.

Parents of kids with special needs get this.

At The Baby’s first annual check-up, they made us do a developmental survey, which my one-year-old failed miserably, as in he did nothing even close to what a one-year-old should be able to do. Afterward, while we waited for the doctor, I wept quietly and she caught me when she came in and comforted me. “I know this is hard. We expect our babies to smile and laugh and develop. It can be very difficult when you’re putting in so much effort and he can’t give you anything back”. I had never felt so validated.

And I’ve kept that in the back of my mind because his development continues to be painfully slow.

But that also makes the small victories that much more sweeter.

Last week, The Baby handed me a toy so I could activate it for him. It was the first time he’d ever done that and he did it twice. I wept both times.

My relationship to Christianity might be up in the air but Jesus continues to draw me in (and scare the shit out of me).

Someday, I will read the story of Lazarus to my son, pointing out that maybe Lazarus wasn’t like everyone else.

Maybe he will understand.

Maybe he will see himself there, valued and loved by Jesus. 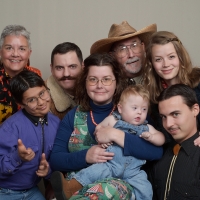